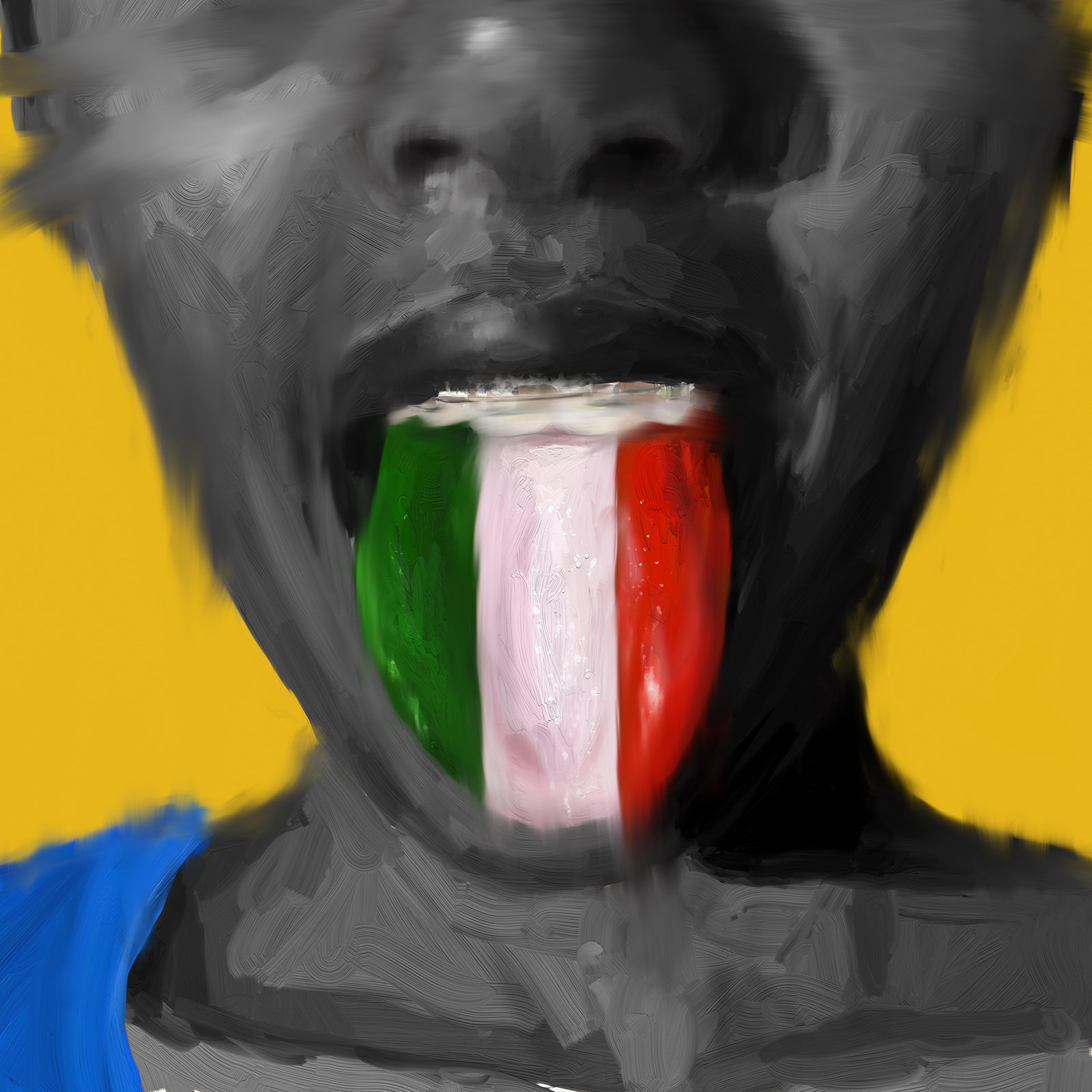 «Tricolore 2022» is a social and artistic project that is aimed solely as a reflection on multicultural identity in Italy.

Luigi Christopher Veggetti Kanku is an Afro-Italian painter, of Congolese origins, who has long been working in the contemporary art scene.
His love for Italy can be seen in his past works, in which he painted scenes and views of Italian cities on large canvases.
Among his main works are portraits of black women that celebrate femininity. On the surface, they show faces that society in general identifies as African, but the concept of identity that the artist is seeking to explore is more profound. Very often the protagonists are actually young Afro-Italian women; so, what is it that determines identity?

We can see it, for example, in “Teenager” (2021), a painting that portrays a black girl who is pulling the classic selfie face, in vogue in recent years, showing her tongue as usual but this time with the colours of the Italian flag. In this work, the artist wanted to emphasize that one of the main elements that determines a person’s identity is the language that they speak. In Italy, it is increasingly common to know or meet young people who look like foreigners but who speak Italian well. We know that each language determines a different way of thinking, a different way of formulating and constructing reasoning.  Additionally, the tongue is also the organ connected to one of the five main senses, taste. Culture is also passed on through food and knowledge of traditional Italian dishes, for which we are known all over the world. From childhood onwards, these flavours are assimilated and become part of who we are, how we identify ourselves. Communication and nutrition are the foundation of a nation.

The entire project was inspired by the work “Le due madri” (2021) and is a contemporary reworking of the famous painting by Giovanni Segantini, kept at the Galleria d’Arte Moderna in Milan.
Christopher says: “I am very happy to have reinterpreted the work of one of the great masters of Italian painting. After more than 130 years this painting has come to life in another form, digital and impregnated with an unexpected social content. A tender work that touches many themes at the same time, without ever being a provocation, just an unequivocal point of reflection». With just a few digital brushstrokes the artist portrays anicon of African motherhood, with a child on her back wrapped in typical traditional cloth. The mother, who looks at the observer with sweet pride, caresses the face of her first-born daughter with her hand. This is just one of the reinterpretations of Segantini’s painting to which Veggetti Kanku referred.

The artist’s works must also be seen as important cultural heritage for younger generations, as it is safe to say that artistic references are generally Western and Eurocentric. The construction of a new representation, in which Afro-descendant youthcan identify themselves, is the real revolutionary message.
In Italy there are more and more young people with African descent who express themselves through multiple languages, such as writing, social communication, fashion, and art, by creating new models to refer to, with new perspectives, to which society is still unfamiliar.
Very often we talk about social change, but in reality, Italy is historically a multiethnic and multicultural country; historical references have been ignored, hidden and sometimes censored and it is for this reason that the new generations need to know and speak aboutthe connections that link their origins to the country.

The first inaugural appointment is on January 20, 2022, in Venice, at the Akka Project Gallery, specialized in the promotion of internationally renowned African artists, in which four totally digital works, NFT format, Non-Fungible Tokens that certify and protect the authenticity of the work of art, signed by the artist, will be exhibited. The traveling exhibition will continue in other Italian cities, but also in Africa, Brazil and the United States.
The international event will conclude in January 2023, at the Museum of Fine Arts (MOFA) of Florida State University.

The tour was planned not only in traditional cultural spaces – such as museums, galleries and art spaces – but also in schools. In fact, the school has always been considered the first real space for inclusion. The artist, in addition to presenting his works from a technical and artistic point of view, will above all be available for a moment of debate on the themes of inclusion and multiculturalism.
Veggetti says: “I like the idea of treating schools like museums and galleries, bringing art directly into institutions. The purpose of this event is to sensitize the individual, so I find it right to start from the base, disrupt the usual dynamics of art and enter the places where citizens begin to form and build their critical sense.”

Cultural bodies, galleries and institutions, if they are interested in hosting the format and joining the project, can do so during this year. 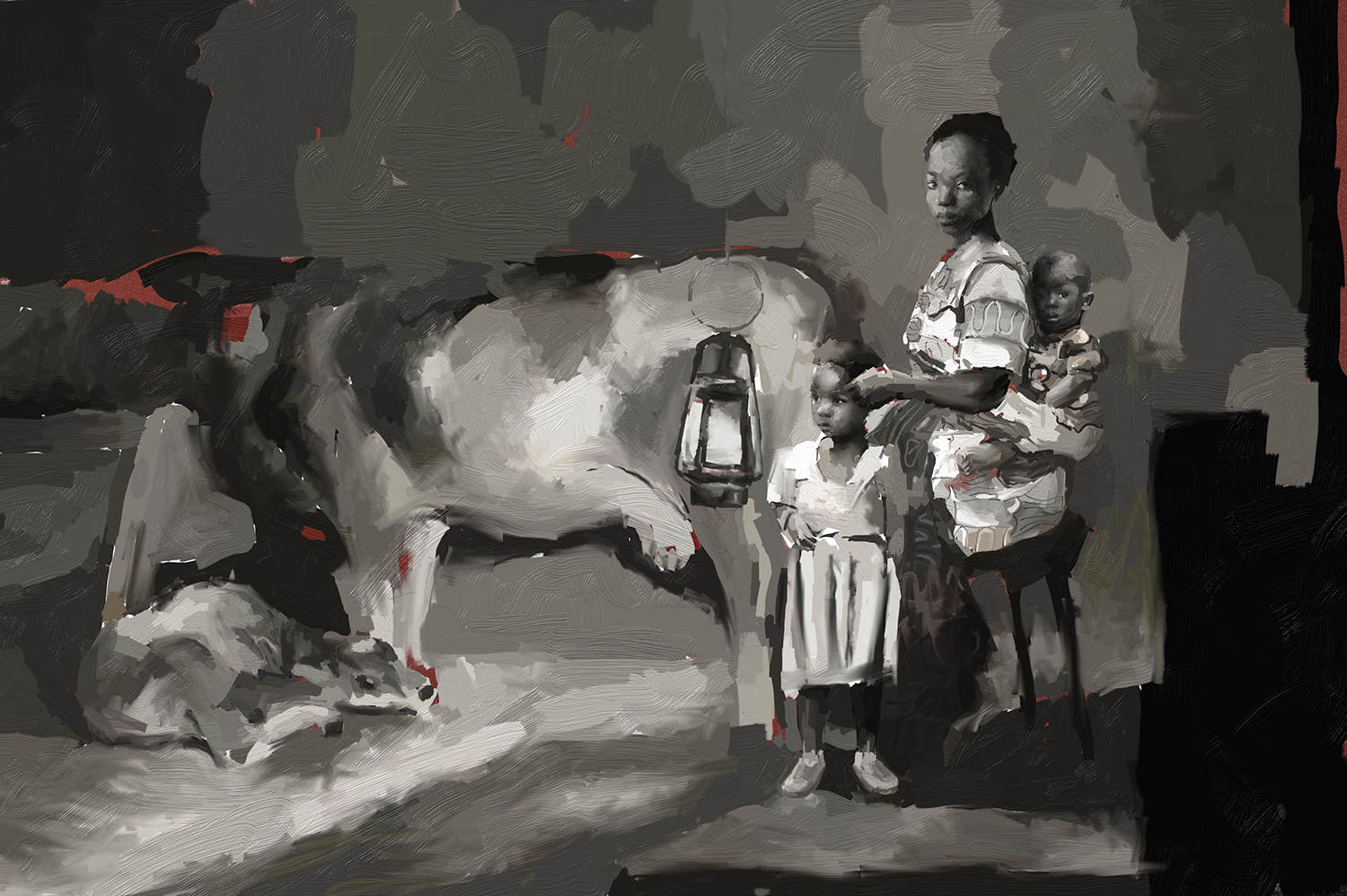